We are very happy to welcome Krav Maga Mentality of Greece, Chief Instructor Apostolos Iliopoulos and his team to the Krav Maga United Kingdom Network.

Apostolos Iliopoulos first started practising Krav Maga back in 2008. In 2012 and after passing the original 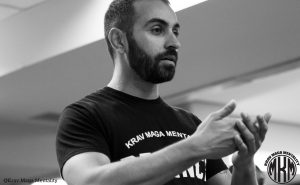 In 2012 Apostolos attended the International Krav Maga Federation’s Instructors school (CIC), where he was taught by Israeli Instructors Amnon Darsa, Israel Tamir, Israel Cohen and Dan Oren. He graduated from CIC as a G1 level Instructor.

Since September 2015 Apostolos has become a Kids Instructor, after attending courses in Germany under the supervision of top level Master Haim Sasson.

In addition, Apostolos is:

Apostolos and his team whole heartedly support Krav Maga United Kingdom’s main Goal: “To teach as many people as possible the most practical, realistic and effective, lifesaving self-defence skills.”

At Krav Maga Mentality their purpose is not to be just another Krav Maga school.

They wish their students to achieve balance between their mind and body in order to be able to adapt effectively in life and any challenges they may face. The key word in all daily difficulties is self-confidence. Krav Maga Mentality’s purpose is exactly that, to teach their students (children, teenagers, and adults) how to deal life with self-confidence.

Krav Maga self defence is practiced in as realistic situations as possible, building strength, stamina, and resilience in scenarios of violence in order to prepare students to be able to defend themselves.

We are very pleased to have Krav Maga Mentality on board and look forward to what the future holds!